Burst your bubble and go for it. 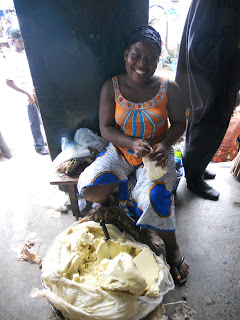 A few other things of note, met the mayer of Monrovia who reminded me of a fired up talk show host, listened to some great live reggae and enjoyed a series of Liberian down pours. My one day out of work, was  spent with a colleague Chris roaming around the streets and markets of Monrovia in the pouring rain. The colors and atmosphere were amazing. We watched as people came to gather their water from the central well, sold used and likely donated clothes, cars and bikes tried to navigate the flooded hazardous roads, young kids showered naked in the rain, and generally Liberians going about their business in a partially destroyed city.
At one point, I was pulled from the crowd to danced in the with a musical group promoting Vita Butter.  Pretty hilarious (Chris, keep you videos to yourself :). Then Chris signed us up to eat some incredibly suspicious food that made haste in our systems.  All together, we did our best to absorb a place that to the Western eye, seems chaotic and run down, but for someone who lives there, it is mundane daily life.  For me, nothing about Liberia was mundane. I quite liked it.     More pics
Posted by Bridgette at 11:28:00 AM 1 comment: