A Senegal for All.

Senegal has by far surpassed my expectations - which to be honest, were nil - that said, come to Senegal! It is a dynamic country balancing between West African, French, and Arab roots. The population speaks French and Wolof, is primarily Muslim, very tall, loves music, football, and food. 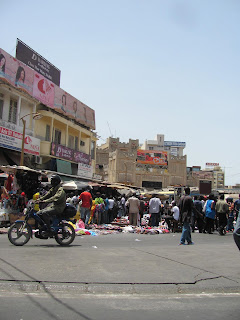 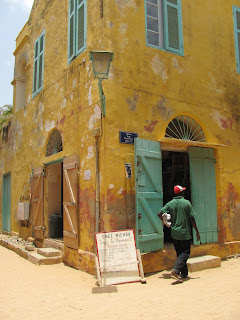 Upon my arrival, I was greeted by Cheick, the head of security for West Africa for the company Google contracts with. Typically he is not a driver but due to the security mix up the night before, he was assigned to my case. Cheick is awesome - super smart, fun insightful and honest. Normally drivers stay in the car and wait for clients, but as I don't like people waiting for me, Cheick has become a partner in adventure, tour guide and friend. 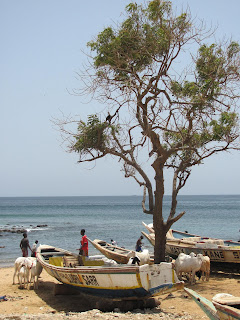 Sunday we spent the day exploring the site including a gorgeous mosque in a fishing village, a small island with cobble stone streets and fantastic beaches, and shared a delicious fish grilled on the beach. Monday I met up with the the two Googlers in Senegal, finally in the flesh - Tidjane and Ayite - who are stunning people, great hosts and fantastic dancers (as proven last night :)
This week has been spent balancing engaging in office debates, working, and exploring Dakar.  It is a vibrant city with tantalizing french-african food, music streaming from every sidewalk, poorly preserved but captivating French colonial buildings, perfect running weather and beautiful beaches.
The streets of Dakar host anything from mercedes to horse and cart. Each corner has a fruit stand, someone selling mobile phone pre-paid scratch cards, and often a big Senegalese man wearing a t-shirt with an English saying on it unaware of it's means. The best I have heard of yet is a huge 6ft 4 guy sporting the saying "Grandma's don't always look this good." 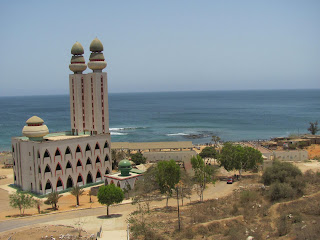 Today was a bank holiday so less working. I took a ferry to Goree Island to visit the slavery museum and old french town - I was accompanied by a PeaceCorp worker Jackie and her mom, who I met through a friend earlier on in the week. Upon my return to the mainland, Cheick met me. I asked for some traditional Senegalese food. Cheick quickly made some calls and we ended up at a house in a bustling neighborhood. His mom, two aunts and cousins greeted us at the door, and fed us some delicious fish and rice. His mom works at the airport but is a seamstress on the side. Before I left, she showed me her items prepared for the market, had me try them on. As a parting guilt, she gave me an outfit despite my pleas to pay. Then Cheick and I headed to the beach and his best friend's house to play music, sing and drink tea - amazing. 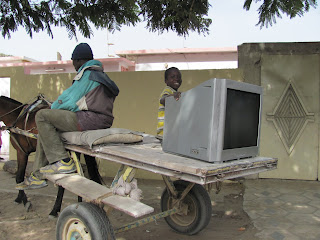 Tomorrow, post work, I am headed to a southern island with Tidjane, his wife, Ayite and girlfriend for two days to relax, go kayaking and visit some villages. We will be about 30 minutes from Gambia which is an anglophone country completely incased by Senegal - I might have to stop by.  Regardless, given my company, it will be an amazing weekend.
Yep, I could live here. I need to learn French.
More pictures.
Posted by Bridgette at 4:32:00 PM 1 comment:

No worries, Ghana's got my back.

For this obruni in Ghana, there is no need for concern. When I meet a Ghanaian, before we part ways, they always ask for my number. Often guys, so they can call me repeatedly with no concept of social norms of frequency or time of day (so far, I have avoided all but one of these who is now code named "Ben the creeper' in my contacts). But for majority of Ghanaians, receiving a phone number, especially from a foreigner, is how they seal the friendship. It is taken with an unspoken responsibility to look out for me. Daily, I receive at least 4-5 calls from acquaintances I don't remember, just to to see how I am doing, if I am sick, and if I need anything.
This same crowd heard I was looking to buy a car. You would have thought I was stranded in burning building by the force that deployed. Ghana is functions on a network of who you know. You don't go to the internet for information (yet:) , instead you phone your sister's boyfriend's uncle's cousin who knows some one who has probably heard of a vehical for sale. He calls his people who call theirs. Then they all ring you with arguments as to why you should purchase what they have and don't need what you want.
Because of my obruni status, this network refuses to allow me to show my face or do any talking. My friend, Akousua has been dialing up connection saying "Hey, I need to buy a 4 x4 right now. I have the money but not much, nothing flashy but reliable and want it soon...(pause).....no no too much, do me a favor, come on. You must know some man with a wife out there unhappy with her 4x4 because it is not as shiny as her girlfriend's. Come on, think harder."
We have yet to be successful but have a plethora of random options. Next plan is to go to a dealer with a few friends, check out all the cars, make a list of the ones I like. Then we will send a different group of guys 1-2 days later to negotiate and make the purchase.  We will see.
The moral of the story is, people here watch out for me, almost to the extreme, including Google. Today, I had a leisurely morning before heading to church. Around 10 AM, I check my phone - 9 missed calls and 27 work emails. As I don't work Saturday's, this seemed a little extreme so I check email and found a stack of 'URGENT" messages. Upon opening, it was apparent, Google was looking for me and had jump started an international security team across Senegal and Ghana. Apparently, our head of security, had incorrectly entered my flight details to Dakar which leaves tonight at 10:22 PM and arrives at 1:30AM tomorrow - as arriving at 1:30 last night. When I never showed up in Dakar and did not answer my phone, they imagined the worst, got the VP of Google involved and the entire Google Africa team....all while I was sleeping peacefully and sipping some coffee.
Seems a little over kill but reassuring for my mother. Mom, this post is for you :-)
Other things of interest, I met some incredibly innovative and insightful people this week in the tech education space - Ashesi University President, MeltWater - some start ups, meet some government Ministers and attended a Internet policy discussion. LOTS of LONG working hours but I love it. Don't worry, I still manage some social time with a few nights out on the town a week :-)
My weekly highlight is my runs. I run a different routes around diverse parts of the city with few Ghanian guys and a former rugby coach from Cameroon. We run through areas with enormous homes, farms, military training, and compacted red dirt paths through shanty towns. Kids yell 'obruni' and run a few steps with me. Young men try to trot along but don't last long - when they give up, I smile, turn while running backwards and say 'that's it?' giving rise to laughter from their friends and family. Its running here is fun despite the unbearable heat.
For real this time, I am going to Senegal tonight - please no security alerts!
Posted by Bridgette at 7:10:00 AM 2 comments:

Teach a man to fish or send him to school.

This past weekend was incredible. I spent Saturday afternoon to Sunday night in a huge house on the beach with a group of friends. We enjoyed some white sand, pale beer, and amazingly refreshing breeze. The friends I joined are mostly Ghanians who were educated and/or group up in the UK and have returned.
Society here is distinctly stratified socioeconomically with education being the most obvious separating factor. Education is free up until age 14 at which point you pay for secondary education (typically boarding schools). Then of course universities are expensive compared to average earnings ($2 per day) and the demand is higher than the seats in classrooms - you often find standing room only in many classrooms. But education is understood as the gateway to a better future so if families who have any money, send their kids as far along in school as possible and out of country for university - hence most of the people I interact with through work are UK or US educated. 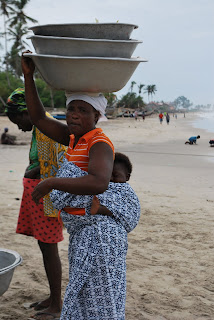 During this past weekend, I spent most of the day watching the fishermen at work. With their hand-crafted boats and tattered nets, setting them beyond the ocean break. After a few hours, the nets would be pulled in from the shore by all the available hands on deck, including the smallest of boys. As the sparse catch hit shore, the men pile around to pull out the fish while kids would crawl through their legs trying to grab what they could scrounge. Women gathered around the harvest with baskets and bowls sorting the fish and preparing to walk the shore selling the fresh catch with their container perched on their head. 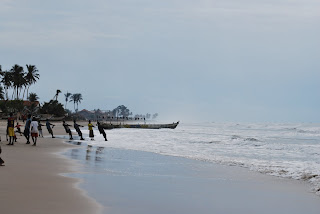 Honestly the women here must have necks of steal. They can and will carry anything on their head - live fish, a table top with sandwich fixings, a enormous bowl of fruit, bucket of water - all while navigating traffic, carrying children, and selling their goods. I even saw a woman walking with probably a hundred bras ready to sell on the street in traffic. What I wondered is who buys a bra from their car window.  Men do carry things to sell on their heads as well although not often bras. Its nice as you can buy anything from your car window from toilet paper to a 3 ft x 5 ft mirror.
I will stop here. I realize I need to blog more often so I write a more digestible amount in each tidbit. Bon appetite