A bit of self definition.

In the past few weeks, I have had a bit of a a two pronged identity crisis. First, I feel I am no longer my own but have become the embodiment of my work. When people quote me, they say " Google says." For those of you who know me well, this probably not the best idea. I am quite outspoken and have an underdeveloped verbal filter....if one at all. What I say has become the word of Google. I now find myself using all sorts of qualifiers including 'this is Bridgette talking,' 'off the record,'  and 'in my personal opinion."  There is a Proverb " he who holds his tongue is wise (10:19)."  Wise I must become :)
The second portion of my identity question mark comes primarily from my clear status as a foreigner. Sometimes I ask myself 'Why can't I be African?'  When you read this question, your first thought is likely, "You are white," or "you were born in the US." But skin color does not prevent you from being a citizen where I come from. I now realize the standout foreigner status has actually been the case in Thailand, Nicaragua, Peru and in the Middle East. The more I travel, the more I understand, where come from is not the rule but the exception.


Before moving to Africa, I lived in San Francisco. If I was asked to describe someone from San Francisco, I would have an incredibly hard time doing it - perhaps hipster in tight jeans who hates plastic bags, mass media and oil companies. But this is not physically descriptive.  (Patriotic moment coming). Where I come from, you are free to be of any ethnic or social origin and be American. Your skin color or hue does not give away much about you. I would say your dress is more determinative than any innate feature. In Sub Saharan Africa and in most of the world, I am by default an outlier.  In Africa, the next steps in the thought series is that I was sent by an NGO, Embassy or am a missionary, likely making bank and working to impose my solutions and take your problems from you. The assumption would not be there I am here to do businesses as I am.
The combination of tags above combine to label me as a foreigner Googler working to improve Africa. While this appears semi-correct on the surface, it is not.
In my hierarchy of self determination, I am first a Christian, second a Sexton, third a friend, fourth a global citizen, and fifth a slightly fearless explorer. It is the combination of these factors that have enabled me to be Bridgette, who works at Google in Africa, not the other way around.  This I am certain of.  For this I am grateful.
Thanks Mom and Dad :)
Posted by Bridgette at 1:11:00 AM 1 comment:

I am going to write this as a two perspective blog. One is on the plane as I fly to South Africa and one will be post visit.
Part 1:
I am curious about this place. It is the most mixed reviewed country I have encountered in candid discussion. People often stay 'it is gorgeous, a different world, not the Africa you know."  This is coupled with 'what you see, unless you try, is not the full reality. You must really try to see the other side. " I feel a bit like a trader going there oddly as my 'home' is the rest of Africa. Mostly, I feel I am hitting shaky ground, unsure of the underline meaning of my actions in a place that is not straight forward and has such a divisive history.
Part 2:
This what you call a delayed reaction. It has been almost two weeks since I left the Rainbow Nation. I spent the first four days on Jo'burg at tech conferences. I thoroughly enjoyed meeting with and exploring the tech community but to my surprise, these Africa themed events were not the Africa I have been involved with. It was...well...almost all white. I knew almost all 'Africans' and sadly I was more acquainted with Africa as whole than the vast majority of South Africans, many of who had never explored their continent outside their country.
South Africa is undoubtably more advanced in many ways visible ways that the rest of Africa. But that said, much of the rest of Africa has advancing as well. It seemed SA is on the edge of  exclusive and quite myopic, not considering the rest of Africa. They don't know that Its not just shanty towns or charity case. Kenya, Senegal and Uganda have better internet connections and more advanced mobile markets than South Africa. Nigeria has 572 %  more internet users despite relying almost entirely on generators for electricity.  South Africa is ideally positioned to take advantage of the maturing lions to the north. It will be to their loss if they don't look north.
All ranting aside, I throughly enjoyed the people I met and had an incredible time drinking cappuccinos, sipping wine, being cold,  getting a bit of exposure to Cape Town night life (thanks Devin) and running along the coast. There were a few definite surprises including Monte Casino in Jo'berg and the entire city of Cape Town. It looks strikingly similar to my college town, San Luis Obispo. Don't worry my California peeps, I still like you better...although there was some pretty amazing sushi and dancing to be had.
Posted by Bridgette at 11:11:00 PM No comments:

I am in liberia writing this blog live in front of an audience of here for a tech training from Google.  Blogging is easy. Have a voice, do say something because you can. This is a way to tell the world something from you, to a be a news source and to provide a perspective only you can have.

Bloggers of Liberia, see you soon!
Posted by Bridgette at 6:44:00 AM 2 comments:

Out of Office...Into the Wild.

I have been working..let's just say, a lot. Luckily, I love my job but it most often captures the day and leaves the night for digital catch up, a nap and typically packing. Not your or my idea of an exciting narration of life in Africa. So the past few weekends I have abandoned the web for the wild. Here are a few escapades. 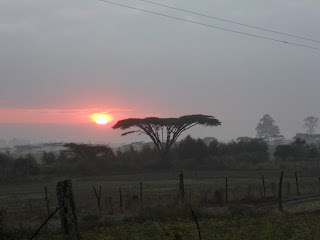 
Heading out of Uganda's capital city Kampala, the populated hills quickly become lush tea plantations, subsistence farms and then jungle. My coworker and I took this stunning drive to spend a day hiking and getting some peace in the lush Rain Forest Lodge. We watched monkeys searching for fruit in the tall trees and listen to birds competing for airwaves. 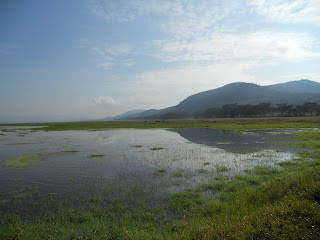 The next morning, we traveled further East to Jinga. On the edge of town, the massive waters of Lake Victoria escape from the northern tip to start a 6,650 kilometer journey to the Mediterranean Sea. The incredible flow creates a series of class 5 to 6 rapids serving as hub for adventure junkies. They are among the top three ranked commercially rafted rapid in the worlds. Needless to say, breathtaking - both from the scenery and from being ejected from the boat on engulfed with monsoon of  thrashing water.  By far the best and most ridiculous ride in a large dingy. 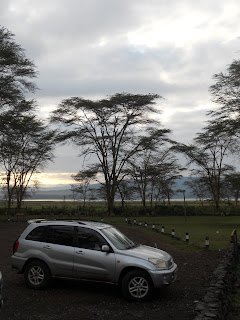 
Last weekends journey began in Nairobi. I rented a 4x4 and three of my friends from church and I headed out of the city to their parents and grandparents village located in the Great Rift Valley near Nakuru. After a three hour drive, we were welcomed into their grandmothers old, well occupied in home - by her, a number of animals and lots of guests. The farm was stunning. In their tribe (Kikuyo), sons inherit the fathers land, each building a home on it. For this reason, I was able to meet a large extended family, see their herd of goats, extensive garden, primitive kitchen, and get attacked by safari ants.

Then we traveled to their parents home, cooked dinner, shared stories and headed off to bed to get up at 5:30 AM in time to beat the rise of the animals and the sun in Nakuru National Park. This is where the 4x4 really came in handy. I took the wheel to practice staying left and also charging through ENORMOUS puddles to find the massive beasts. 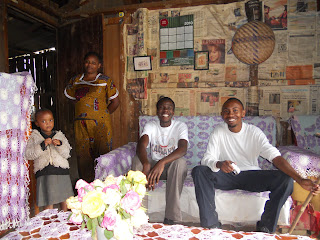 We saw a myriad of animals including water buffalo, giraffe, baboons, rhinos, hippos, hyenas, antelope, flamingos, monkeys and a million birds. Most memorably, we got chased and nearly attacked by a baboon... twice, nearly drove into a river, sat to observe young hyena cubs in their den, challenged a water buffalo with a Rav 4 and nearly got stuck at least a dozen times. This is my second safari and I must say, behind the wheel, is where the real adventure happens. ...just ask my passengers :)

Since then, I have been working mostly except randomly last weekend, I ended up at a  free jazz concert and unknowingly met a bunch of Kenyan celebs. Rappers are exactly what you think they are...except shorter :)

Now I am in South Africa but more to come on that later. Here are lots more picks. 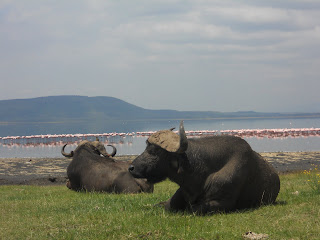 Just in case you are curious, here are a few of the infamous Kenyan musicians.  Eric Wainaina, Collo, and Makemende, who was the first viral YouTube video star in Kenya.
Posted by Bridgette at 10:15:00 AM 1 comment:


There are a few things that bother me about how people reference Africa. The way the media, especially, BBC World goes out of its way to hunt down the five tribesmen in a modern city in Mombasa, Kenya to do a report on technology.  I often hear people say when they see a nice house, a mall or a great city skyline “this isn’t REAL Africa.” Yes, it may not fit your image of Africa and it is in no way the majority, but is it Africa and in many places, there is progress that should be acknowledged.
The image of poverty sells and people, NGOs and governments who profit from it, perpetuate pictures.  Yes, absolutely there is poverty, disease, poor infrastructure, corruption. Liberia has absolutely no electric grid, the city hums with generators. Nigeria has a province declared a war zone due to oil disputes. The DRC has the highest rate of rape victim in the world.  But these are the stories you already hear. There is another perspective. Africa is full of entrepreneurs, and able-bodied people, with good minds, working hard and being incredibly scrappy with the resources they have.
One of my Nigerian co-workers has a theory – across the globe, the percentage of geniuses fairly consistent across populations. Given the high rate of natural selection in Nigeria and the population of 150 million, there must be a significantly higher rate of Einsteins roaming the streets of Lagos.  This just might be the case (Welcome to Lagos).
Working in tech, I admittedly have a skewed perspective. I meet the some of the brightest geeks in Africa including the likes of Jojo, Fritz, Ushihidi, Encipher. They are making strides and overcoming barriers western techies would never encounter. They are working hard to develop modern technologies often in what a westerner might consider primitive conditions. But, they see potential in an emerging market with rising consumer demand. You see only the dusty dirt roads, mud huts and Maasai warriors, not a place worth building technologies for.
These guys, along with many African's, have changed my picture of Africa. No doubt, life here is more difficult and opportunities harder to come by. But this group of self-starters, visionaries and dare I say, geniuses are making it in a very "real" Africa.