Things don’t always operate in Africa as my western mind would expected. I am constantly surprised by amazing and ridiculous things. Sometimes they are great surprises, like finding that a University of Nairobi's choir practices on the bleachers next to the dirt track where I often run. Sometimes its just mind blowing, like seeing guys carrying 80+ water cans on a single motorbike. Sometimes it is just unbelievable. Often I find myself muttering the commonly used phrase “TIA," which stands for, “This is Africa.” 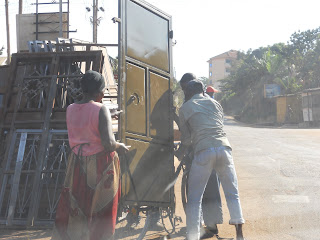 Wikipedia defines “TIA”  as meaning go with the flow/don't expect anything to run on schedule/enjoy life. I define TIA everyday. Here are a few recent definitions.


Yep, my flight stopped in three countries not listed on the itinerary. Pretty sure I spent at least 2 hours in Mali.


I left my office in Nairobi for a meeting, an hour later, I could still see it as I sat in the parking lot called a road.


From my car window in Accra, I can buy anything from baby shoes to a mounted six foot poster of Jesus.


We spent nearly an entire day looking for a staple gun in well stocked stores in Nairobi. Five stores later we found one, but they did not have staples that fit it. Back to the previous four.


Public transit does not stop, you just get out.


No, we don’t take our local currency to pay for your visa into Kenya, you need to go exchange it for US dollars and come back to stand in ocean deep line.


“Why yes, this was the chicken that was just running around.”


The potholes are so enormous and frequent in Uganda, the locals have a saying that, “You can tell a drunk driver here, because they drive straight.”


Taxi driver to me: “I have always wanted to go to the US. Are you married? “ Total number of proposals: 68. Most recent: This morning.


You want to rent the City Hall Monrovia, Libera, no problem, $1500 a day. The cost includes the room. If you want power, that is an additional + $475 for 50 gallons of diesel to power the generator.


The plane ticket is only $159. It’s the +250 for taxes that makes it expensive.
Daily discussion with the security guard “You want to marry a Kenyan man or an American?”
Anything can be carried on your head or  transported by bike, who says you need trucks.


I bought a crappy expensive hair dryer from in Ghana. The power plug was for South Africa which fits in exactly zero outlets in Ghana and zero international converters.


When I order take-out, the motorcycle taxi asks where to drop it. Since there are very few or no addresses, its always a fun game of reference. “I live near the city Water Works, by Palm Wine Junction…”


Quote from colleagues, “The pastors in Kenya are some of the richest people.”


Kenya “we found out today three years after being in office, that the politician rigged the elections. They kicked her out to have a reelection. She is running again.” 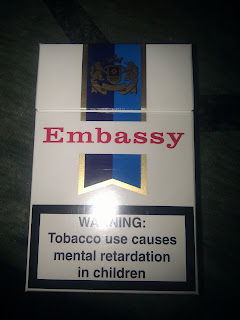 A Ugandan woman on my last flight to Kampala tried to open the rear emergency exit in search for a restroom. Luckily, a flight attended returned to get some more tea, and caught her. She then spent the next 10 minutes screaming at the woman.
Article headline in Uganda’s national paper, New Vision states, “Computer-linked illness paralyzes woman.”   The illness they are referring to is Multiple Sclerosis. Not sure this is scientific.
Posted by Bridgette at 1:22:00 PM 2 comments:

Change of Latitudes, Change of Scenery

I continue to fail at blogging. Since I wrote last, I have been on seven flights, making a path from Accra to London to Tel Aviv to Nairobi, Kampala, and back to Nairobi. Fun ride. I had a bit of a 'workacation' in London - meaning I worked 8 hour days and played the other 16, taking full advantage of the late summer nights of the northern hemisphere.
In London, I did not see the Big Ben, Tower or Westminster. This trip was more about absorbing good friends, good food, and double-dip recession shopping - oh, Google food again! Big Dave, Aaron, Hannah, Mike, Dave and Joseph were just what the witch doctor ordered to cure a coming case of burn out, and a great way to celebrate the 4th of July (or Rebellion Day as the Brits call it). 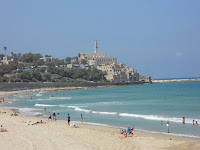 After five memorable days, I rushed off to Heathrow to hop a flight to Tel Aviv.  It was not that fast. When I arrived at El AL, the Israeli national airline, I was greeted with hostility, interrogated, forced to demonstrate that all my electronics functioned, stripped of all my belongings except my phone and passport, escorted by security guards to my gate airport and then amusingly noted that my bra took a trip a security conveyer belt on its own. To top it off, one of my Israeli armed escorts, asked me out on a date - he said he never saw someone so amused during an 1.5 hour security briefing :). Moral of the story, don't by a one way ticket on an Israeli airline,  and try to explain you are living a nomadic African life working for a tech company. In general, they find it very unplausible.
Israel is amazing. This was my second time to visit the historic epicenter, it just keeps getting better. I stayed in Tel Aviv right on the coast of the Mediterranean. Tel Aviv is the secular center,  the king of night life, the Miami of the Mediterranean, not to mention, full of incredibly gorgeous people. If only I was Jewish. 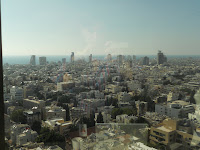 My work brought me between Haifa and Tel Aviv. The first afternoon, I spent working at a colleagues house in a small coastal village and then the entire night wrestling and playing on the beach with her three kids. During the week, I reveled in some World Cup action, went on a date with the Israeli security guard from Heathrow, enjoyed great music, hot summer nights and fell back in love with hummus. 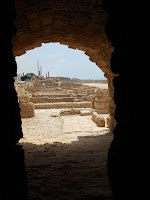 I took a three day weekend as Friday is a not a working day in Israel. I walked the Old City of Jaffa,(the longest inhabited city in the world), strolled some markets, and met up with Kurt Hoyer, a friend who is stationed with the State Department. Sadly, his family was out of town but he was an absolutely fantastic host. We explored the old ruins of Caesarea. As Kurt says, Herod the Great had an eye for real estate.
Sunday, we drove through the West Bank to Jerusalem. The Old City was as fastinating as I remember but much hotter. We walked the tops of the city walls, roamed the ancient streets, spend time on the temple mount and to cool down, walked through the Hezekiah's Tunnel  (Chronicles II, 32:30) in the City of David.
The tunnel a is narrow man-made water channel that built by King Hezekiah i to divert the potable liquid into the city wall and protect it from invadors. Kurt and couldn't have had better timing. WIth 45 feet of dirt above us, we submerged ourselves in pitch black tunnel up to our knees in water to walk the half mile length of the tunnel with about 20, thirteen year old girls on a school trip who screamed, yelped and shrilled their way through the reverberant tunnel. 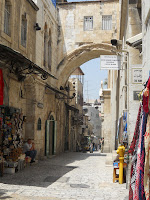 Now I am back in Africa, working tons but with a bit of time for running, Karaoke and up coming, rafting the Nile. This weekend, I am sorting out a temporary apartment in Nairobi as it looks like need to be in East Africa for the next 7 weeks minus two small trips to South Africa and Liberia. I departed Ghana for London June 29th with one carry-on which is now going to last me until September 10th. Need to do laundry.....again.
More Pics can be found here and here. 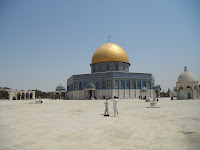